Menu
Log in
Register
Install the app
You are using an out of date browser. It may not display this or other websites correctly.
You should upgrade or use an alternative browser.

Staff member
Good thing he wasn't watching Roadrunner/Wile E Coyote too, they might have popped him for weapons possession

This is why the SCotUS ruled several years ago that cartoon images of child pornography are not a criminal offense. I guess they saw this shoe in the air. Canada is not the best place to live as their laws are a bit strange in some cases.

A man in Australia is believed to be the first to have been convicted as the result of an undercover sting in which charity workers posed online as a 10-year-old Filipina.
Details of 1,000 men who contacted the fake child, nicknamed Sweetie, were sent to police around the world
The men had requested Sweetie perform sex acts in front of a webcam for cash.
The names of 110 British men thought to be among those involved were sent to the UK's National Crime Agency (NCA).
It says it is actively pursuing the investigation, although no arrests have been made.
Scott Robert Hansen, who is a registered sex offender, pleaded guilty to three charges in Brisbane District Court.
He admitted sending obscene pictures of himself to Sweetie, having images of child sexual abuse on his computer and failing to comply with a sex offenders order.
He was sentenced to two years in prison, but is not expected to go to jail because of the eight months he has already been in detention. 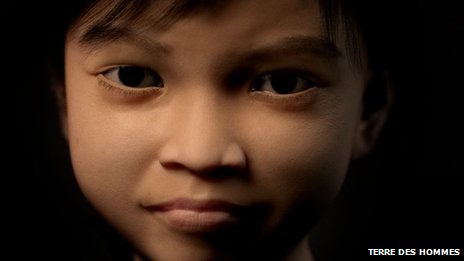 Terre des Hommes has offered to share the technology it used to create Sweetie with police forces
He will be subject to a 12-month correction order and was ordered to undertake a sex offender treatment programme.
Chat logs
BBC News has obtained the chat logs of Hansen's conversations.
Hansen started by asking: "hi u really 9yo"
The operator replied: "Yes," to which he wrote: "wanna chat or cam with older?"
He went on: "I like asian chicks, are you... for action"
Continue reading the main story
“Start Quote


Some of the men we interacted with literally give me nightmares”​
Operator, Terre des Hommes
His comments became more explicit: "i'm naked, ever seen a guy naked?"
He then turned on his webcam and performed a sex act in front of what he believed was a nine-year-old girl.
Judge Ryrie, in sentencing said Hansen had "a protracted interest in targeting children in various ways".
The fact the girl was not real was irrelevant, she said. "If you believe that's a nine-year-old girl, then that's the law, that's good enough."
Internet patrols
This is thought to be the first conviction related to the Sweetie operation. It was created by a Dutch charity called Terre des Hommes.
Head of the programme Hans Guyt said he and his colleagues had always hoped the information would be used by police forces to mount their own operations.
"Law enforcement now know that the information we supplied can be very useful," he said.
Jump media player
Media player help
Out of media player. Press enter to return or tab to continue.

Undercover operator 'Some of the men give me nightmares'
He added that police had to be more proactive. "The only way to try and find these people is to patrol the internet," he said.
A team of four researchers worked on the project for 10 weeks in 2013. They posed in chat rooms as Philippine girls.
Sometimes they even used a computerised avatar, which they would show men via web cam.
Nightmares
BBC News has spoken exclusively to one operator, who asked to remain anonymous.
"Some of the men we interacted with literally give me nightmares," he said.
Regarding Scott Hansen, he commented: "He was very direct, at one point he asked us to get our fictional eight-year-old sister involved. It was very difficult to go to sleep at night after interacting with someone like Hansen."
The operator is proud of playing a part in Hansen's conviction, but wishes there had been more. "He was probably not the most serious, not even amongst the most serious," he said.
Over the period of the project tens of thousands of men contacted the team. The names of 1,000 were given to Interpol, which distributed the identities to 71 countries around the world.
This is the first reported conviction related to the project.
National Crime Agency
The NCA said a substantial amount of work needed to be done to identify the 110 men it had been notified about.
It said it was "actively pursuing" the investigation but could not offer further detail. 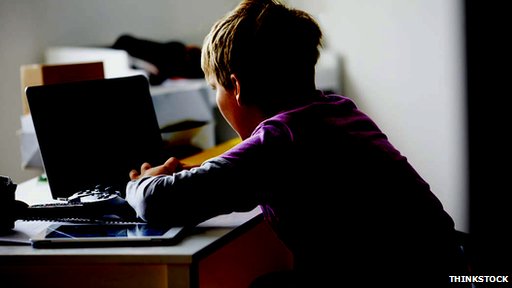 Terre des Hommes has said that webcam sex tourism requires new policing techniques
BBC News has seen the British files - much of the information would not be admissible in court.
Some of the men are untraceable. Others, though, would be easy to find, and their behaviour is very disturbing.
The NCA has confirmed it has not yet passed the information to individual forces.
This may prove controversial following the NCA's previous admission that it had failed to pass on information from Canadian police in 2012.
The details of more than 2,000 British men who had been buying child abuse images from an online video store in Canada was passed to the Child Exploitation and Online Protection (Ceop) centre in July 2012.
Ceop judged the men low risk and did not inform local forces until November 2013, when it became part of the National Crime Agency.
Several of those men, including Cambridge paediatric cancer specialist Dr Myles Bradbury, have since been convicted of child abuse offences.
The head of the NCA, Keith Bristow, has apologised for the delay in passing on information
He has also referred the handling of the information to the Independent Police Complaints Commission.
Today the NCA said it received "1,600 referrals relating to potential child abuse every month", adding that it gave "top priority to those cases where an immediate or high risk to a child is identified"
Click to expand...